PDF version of original product. RPG Item Version. The Caverns of Thracia · Original D&D Electronic (PDF, DOC, eBook, HTML, etc.) Product Code. From publisher blurb: A Lost Civilization Beneath the lost ruins of Thracia are the vast caverns of a once great civilization. While a death cult rules the surface. Caverns of Thracia (Dungeons & Dragons) [Paul Jaquays] on musicmarkup.info * FREE* shipping on qualifying offers. Classic D&D adventure, one of the best.

One of the problems I have with a lot of 4E design is the idea of balance that seems so intrinsic to it's philosophy and which shouldn't exist in a more fully-realised world. There should be situations where the only sensible option is for the players to run away or seek another way around the problem.

You would have to reverse engineer the stats, of course, but it's an option. Paul Jaquays remains one of my favorite adventure designers. Also, his Runequest work, mainly Griffin Mountain, is outstanding.

Both had an incredible ability to stuff an immense amount of ideas into a relatively small product. From what I understand, the Necromancer Games 3. I also understand that the NG version expands upon the original levels of the dungeon, although again to what extent I don't know yet.

Is anyone else out there familiar with both? I'll be the first to congratulate you if you do; it's one of the many lessons the old school still has to teach us about adventure design and I'd be very pleased to see it incorporated into newer games.

I'd be very curious to see this thesis tested. My fear is that a lot of younger gamers simply have no experience of this kind of play and would consider it "unfair.

They pop up on site pretty regularly and often go for very little money. The D20 version produced by Necromancer is quite good too. Just ignore the stats and revel in its glory.

The maps are amazing and they contribute heavily to what makes this module the masterpiece that it is. I think you're on to something there. The irony, of course, is that this module actually did inspire me to try and imitate it and, while I failed by any measure, I did learn a lot from the experience.

Personally, I'm of the opinion that having one's reach exceed one's grasp is a good thing, particularly in creative endeavors, but I suspect that you've identified a very reason problem that occurred as the hobby became more "professional" and the mentor culture of early gaming disappeared. The problem is wider than 4e.

Indeed, 4e's design is simply, from what I can tell, dancing to the piper rather than calling his tune. Bravely running away, we are told, is not "cool" and gaming is supposedly all about being cool. Very much agreed on both counts, although I would argue that the immensity of ideas contained within small products was pretty much the standard in the early days of the hobby.

I have the Nec version; by 3e standards it's very light on 3e stats since MM monsters are justed listed as eg "6 gnolls hp 6". I'll tell you what, just to be devil's advocate: Personally I think that particular module is just awful, definitely the weakest of the Master M-series line.

I'll also critique Moldvay's X2 just read it over the holiday. I didn't realize at the time how distinct that was, but in some sense it set the seeds for Hickman, 2E, etc.

Judges Guild – The Caverns of Thracia

I never owned any of the Master series modules. Much as I love X2, you're correct that it's a forerunner of the Hickman Revolution. There's much more of a story to it than, say, Isle of Dread and its conclusion even features a super-powerful NPC who can right all the "wrongs" done to the PCs in their explorations of the Castle. I try to overlook these things, but you're right to bring them up.

Case in point: I like exploration. I like to crawl from hex to hex uncovering 5 ants in one hex to the ancient red dragon in the next Now, ask me to map it, you know, where the DM says: Meaning if he drew "turns left" instead of "turns right" the map would be screwed up and if the group tried to backtrack they'd be lost. It's a game that requires very precise and detailed small squad military tactics.

I like tactics but not to that depth. I don't call that unfair, it's just, I guess the default play style of the game. Wednesday, December 31, Retrospective: The Caverns of Thracia. The Caverns of Thracia by Paul Jaquays is a good example of why Judges Guild is remembered so fondly by so many of us who started gaming in the 70s.

Published in , Thracia is both a large dungeon and a campaign setting in its own right. While perhaps not large enough to be called a true "megadungeon," the four levels of the caverns are nevertheless expansive and filled with a wide variety of humanoid factions -- a few of them mutually antagonistic -- which contributes greatly to the feeling of dynamism the module evokes.

This is a "living" environment that puts paid to the notion that old school dungeons are static places with monsters statically side by side without any interactions between them. Even more significant, from my perspective, is the diversity of environments within this module. 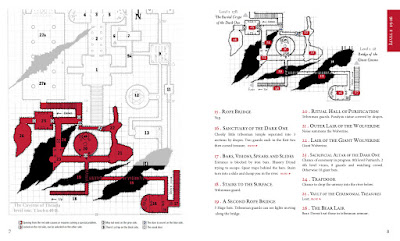 Firstly, there is the Lost City of Thracia itself, a surface ruin that is the start of the characters' explorations. It seems you can't go ten feet without being jumped by gnolls, minotaurs, or other nasties.

Another problem is that monsters which could be surprises aren't. Skeletons, dead bodies, statues, etc. My player's reactions have been very positive toward this dungeon.

Since that time, The Caverns of Thracia has come to be regarded as one of the classics of the genre, particularly within the Old School Renaissance community. Within this community, creating a dungeon that matches the amount of flexibility presented to the players in terms of available exploration paths and interactive factions has become known as Jaquaying a dungeon a term coined by Justin Alexander of The Alexandrian blog.