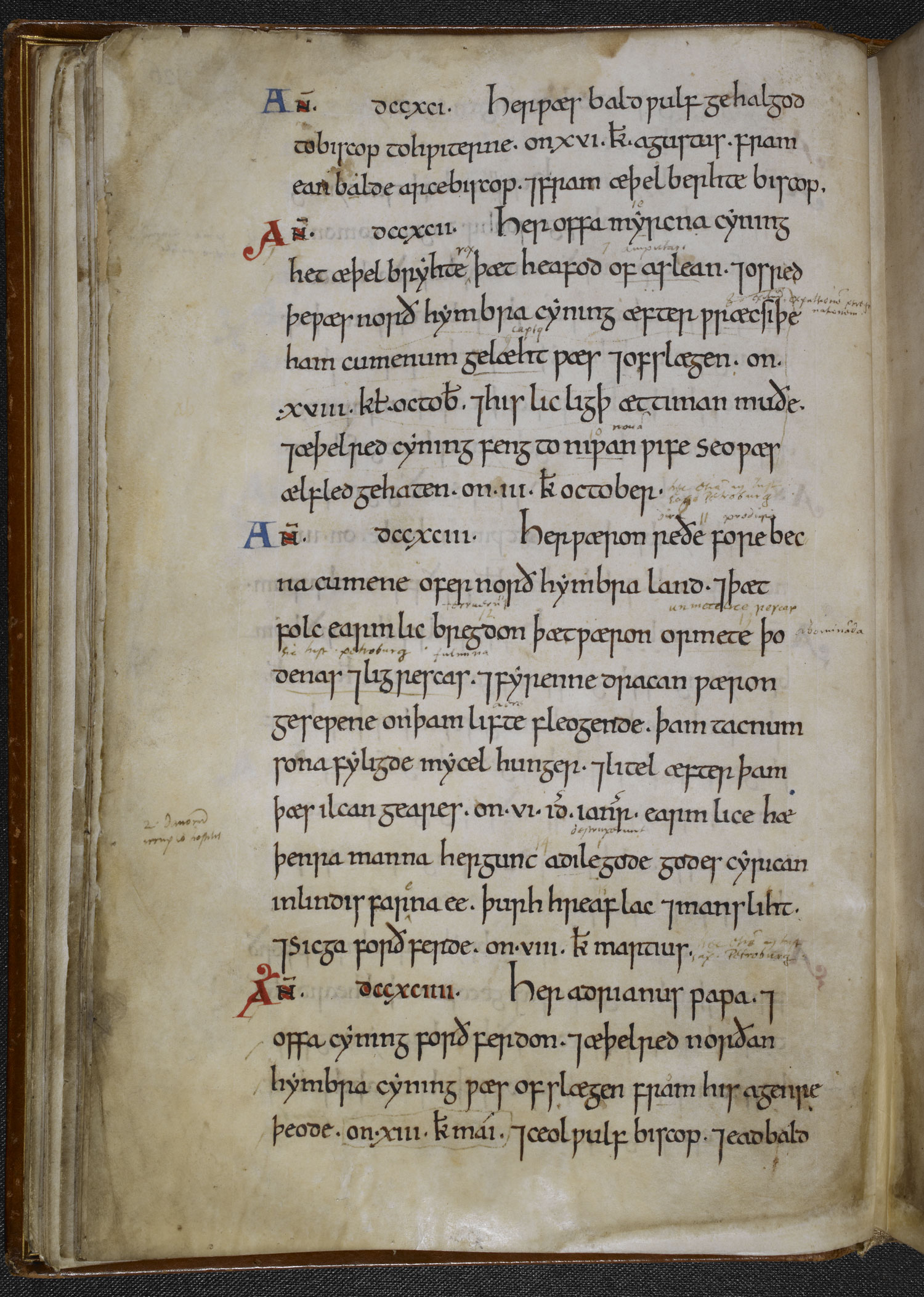 With the publication in of a new edition of the Peterborough text, all six major manuscript versions of the Chronicle are now available in the Collaborative Edition. Reading the Anglo-Saxon Chronicle therefore presents a timely reassessment of current scholarly thinking on this most complex and most foundational of documents. This volume of collected essays examines the Anglo-Saxon Chronicle through four main aspects: the production of the text, its language, the literary character of the work, and the Chronicle as historical writing. The individual studies not only exemplify the different scholarly approaches to the Chronicle but they also cover the full chronological range of the text s , as well as offering new contributions to well-established debates and exploring fresh avenues of research. The interdisciplinary and wide-ranging nature of the scholarship behind the volume allows Reading the Anglo-Saxon Chronicle to convey the immense complexity and variety of the Chronicle, a document that survives in multiple versions and was written in multiple places, times, and political contexts.

Excerpts from the translation of Dr. Giles were included as an appendix in the Everyman edition; the preparer of this edition has elected to collate these entries into the main text of the translation. Where these collations have occurred I have marked the entry with a double parenthesis. Ingram in this edition, please note that they should be used with extreme care.

In many cases the views expressed by Rev. Ingram are severally out of date, having been superseded by almost years of active scholarship. At best, these notes will provide a starting point for inquiry. They should not, however, be treated as absolute. Taylor, S.

Contains side by side translations of all nine known texts. Poole, A. These are, the Record of Doomsday 1 and the "Saxon Chronicle" A manuscript that is now separate British Library MS. Cotton Tiberius Aiii, f. Shortly after this it went to Canterbury, where interpolations and corrections were made.

As with [A], it ends with a list of popes and the archbishops of Canterbury to whom they sent the pallium. This entry is for , a year of battles between Wessex and the Vikings. The manuscript continues to and stops in the middle of the description of the Battle of Stamford Bridge. In the 12th century a few lines were added to complete the account. After it includes some records from Worcester , so it is generally thought to have been composed there.

Five different scribes can be identified for the entries up to , after which it appears to have been worked on at intervals.

The text includes material from Bede's Ecclesiastical History and from a set of 8th-century Northumbrian annals.

It is thought that some of the entries may have been composed by Archbishop Wulfstan. From to , the sees of York and Worcester were both held by the same person— Oswald from , Ealdwulf from , and Wulfstan from , and this may explain why a northern recension was to be found at Worcester.

By the 16th century, parts of the manuscript were lost; eighteen pages were inserted containing substitute entries from other sources, [7] including [A], [B], [C] and [E]. These pages were written by John Joscelyn , who was secretary to Matthew Parker.

The copy of the Chronicle kept there may have been lost at that time or later, but in either case shortly thereafter a fresh copy was made, apparently copied from a Kentish version—most likely to have been from Canterbury. The Canterbury original which he copied was similar, but not identical, to [D]: the Mercian Register does not appear, and a poem about the Battle of Brunanburh in , which appears in most of the other surviving copies of the Chronicle, is not recorded.

The same scribe then continued the annals through to ; these entries were made at intervals, and thus are presumably contemporary records.

Finally, a second scribe, in , wrote an account of the years —; but his dating is known to be unreliable. This last entry is in Middle English, rather than Old English. Previous owners include William Camden [20] and William L'Isle ; the latter probably passed the manuscript on to Laud. The version the scribe copied on folios 30—70 [23] is similar to the version used by the scribe in Peterborough who wrote [E], though it seems to have been abridged.

It includes the same introductory material as [D] and, along with [E], is one of the two chronicles that does not include the "Battle of Brunanburh" poem. The manuscript has many annotations and interlineations, some made by the original scribe and some by later scribes, [7] including Robert Talbot.

The Anglo-Saxon Chronicle by J. A. Giles and J. Ingram

This manuscript was almost completely destroyed in the fire at Ashburnham House , where the Cotton Library was housed. The original [A2] introduction would later be removed prior to the fire and survives as British Library Add MS , f.

In the entry for it includes the phrase "he came to Winchester"; hence it is thought likely that the manuscript was written at Winchester. There is not enough of this manuscript for reliable relationships to other manuscripts to be established. Until the death of Anselm of Canterbury they are in English; all but one of the following entries are in Latin. After , the annals are in various contemporary hands. 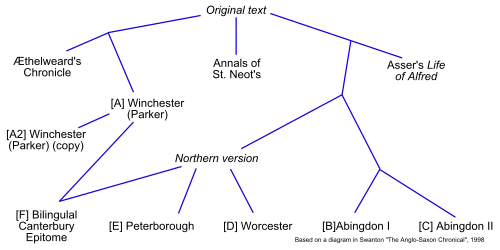 In addition, Parker included a manuscript called Hist. The entry for , describing how Cynewulf took the kingship of Wessex from Sigebehrt , is far longer than the surrounding entries, and includes direct speech quotations from the participants in those events. It seems likely that this was taken by the scribe from existing saga material. The chronological summary to Bede 's Ecclesiastical History was used as a source.

The Chronicle gives dates and genealogies for Northumbrian and Mercian kings, and provides a list of Wessex bishops; these are likely to have had separate sources. The entry for records a battle fought by Cenwalh that is said to have been fought "at Easter"; this precision implies a contemporary record, which survived and was re-used by the Chronicle scribe.

As the Chronicle developed, it lost its list-like appearance, and such notes took up more space, becoming more like historical records. Many later entries, especially those written by contemporaries, contained a great deal of historical narrative under the year headings.

The actual name of the fortress was probably "Wihtwarabyrg", "the stronghold of the inhabitants of Wight", and either the chronicler or an earlier source misinterpreted this as referring to Wihtgar. In addition to dates that are simply inaccurate, scribes occasionally made mistakes that caused further errors. For example, in the [D] manuscript, the scribe omits the year from the list on the left hand side. The annals copied down are therefore incorrect from to , which has two entries.

Some other entries appear to begin the year on 25 March, such as the year in the [C] manuscript, which ends with Edward the Confessor 's marriage on 23 January, while the entry for 22 April is recorded under There are also years which appear to start in September.

It has been argued that the Chronicle should be regarded as propaganda , produced by Alfred's court and written with the intent of glorifying Alfred and creating loyalty. An example can be seen in the entry for , which describes Egbert 's invasion of Northumbria. According to the Chronicle, after Egbert conquered Mercia and Essex , he became a " bretwalda ", implying overlordship of all of England.

Then when he marched into Northumbria, the Northumbrians offered him "submission and peace". The Northumbrian chronicles incorporated into Roger of Wendover 's 13th-century history give a different picture: "When Egbert had obtained all the southern kingdoms, he led a large army into Northumbria, and laid waste that province with severe pillaging, and made King Eanred pay tribute.

And he admitted this before all the men who were gathered there, although the words shot out against his will. And here came a raiding ship-army from Norway ; it is tedious to tell how it all happened. It has sometimes been argued that when the Chronicle is silent, other sources that report major events must be mistaken, but this example demonstrates that the Chronicle does omit important events.

There is no evidence in his work of any of the entries in [E] after , so although his manuscript may actually have been [E], it may also have been a copy—either one taken of [E] prior to the entries he makes no use of, or a manuscript from which [E] was copied, with the copying taking place prior to the date of the last annal he uses. Henry also made use of the [C] manuscript. The manuscript of the chronicle translated by Geoffrey Gaimar cannot be identified accurately, though according to historian Dorothy Whitelock it was "a rather better text than 'E' or 'F'".

Gaimar implies that there was a copy at Winchester in his day the middle of the 12th century ; Whitelock suggests that there is evidence that a manuscript that has not survived to the present day was at Winchester in the mid-tenth century. If it survived to Gaimar's time that would explain why [A] was not kept up to date, and why [A] could be given to the monastery at Canterbury.